Below Cherry County's Merritt Dam slithers the sinuous Snake River. Hiding sacred land and secret hideouts alike, there is no telling what other twists and turns await us on Snake River. 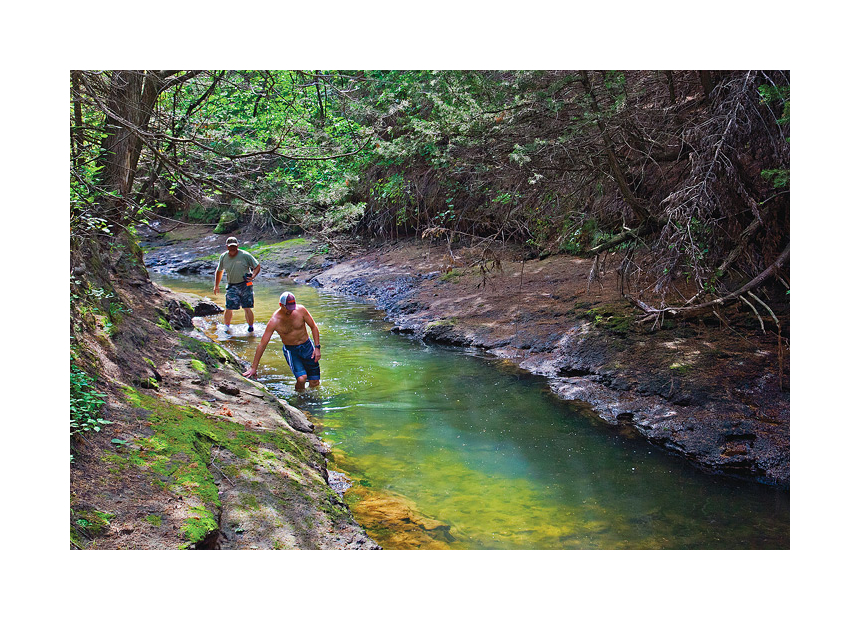 "WATCH OUT FOR rattlers,” Dave Kime tells us with a wry smile as our tennis shoes and boots enter the Snake River.

After months of planning, three of us – photographer Jack Nordeen, guide Ryan Kelley and me – are finally stepping into this wild and wooded Nebraska river.

Its headwaters are 120 miles away in a Sheridan County wet meadow owned by media mogul Ted Turner. It moves in serpentine fashion through Cherry County’s grass-stabilized sand dunes then fills Merritt Reservoir, a 3,000-acre fishing and boating oasis in central Cherry County about 25 miles southwest of Valentine.

The Snake makes an abrupt left-face at Merritt Dam, burbling across sandstone caprock then falling hundreds of feet through pine- and cedar-filled canyons before flowing into the Niobrara River.

The portion above Merritt is easily navigable by canoe and kayak – its broad channel glides and dodges giant sand hills while range-roaming cattle look on from above. But this lower portion is another river altogether.

Waterfalls, steep ledges, deep pools, narrow draws, sunken logs, ankle-breaking boulders and a complicated ownership structure make this section the prize of our adventurous eyes. The Snake got its name here – from the rattlers we’re likely to encounter along the way.

The three of us aren’t alone in prizing this stretch of the Snake River. People have cherished it for thousands of years. It was sacred land to the natives, as evidenced by the burial mounds that punctuate its east banks near the Niobrara River. Legend has it the great Lakota warrior Crazy Horse retreated here as a teen after his first fight with U.S. soldiers. A few decades later, homesteaders tried to carve out a living on 160-acre parcels, while outlaw Doc Middleton befriended locals and harbored bootleg horses at his Rustler’s Roost hideout.

Kime’s own family fits into this illustrious history of ownership/ obsession with Nebraska’s lower Snake River. They’ve owned a big portion of it since 1935, including the largest waterfall in Nebraska: Snake River Falls. His grandfather thought the falls would be important someday – for hydro power or a mill. Turns out it’s been a tourism hot spot.

“Even when there was no road and just 26 miles of dirt two-track from Valentine, there were still people who would come out to see the falls,” Kime says. “Most of the time we had to pull them out of a blowout.”

Kime’s family developed a little vacation resort a few minutes’ walk from the falls. It had a restaurant, cabins and a campground. They charged a small admission to walk to the falls. At the resort’s peak in 1988, 12,000 people signed the guestbook to see the falls in one summer.

Finally last year, his family sold the falls and other Snake River ground to the Snake Falls Sportsmen’s Club, whose approximately 100 member families hunt, fish and steward the land, the wildlife and the river.

A half dozen other families or ranching corporations own swaths and swatches of the river between the dam and its confluence with the Niobrara. Property rights are important here, and permission is a must to cross the property, so before setting foot into the river, we stopped in to see the Sportsmen’s Club’s man on the scene, Steve Broekemeier.

Broekemeier’s previous career was as a dam builder for the U.S. Bureau of Reclamation, a job he darn sure enjoyed. To his credit is the dam at Calamus Reservoir in Burwell. His job was a casualty of reduction of workforce, so Broekemeier came here to work for the Ainsworth Irrigation District, which draws water from Merritt Reservoir.

He and his wife, Kris, live in the house immediately north of the dam, located between the irrigation district’s concrete-lined irrigation canal on the east and the Snake River on the west.

“What did you think of the Snake River when you first saw it?” I ask him.

“ ‘It’s a long ways down there.’ That’s what I remember saying,” he says. “It’s pretty awesome. I appreciate it now more than I did when I was younger.”

When we visit Broekemeier, irrigation season is drawing to a close, so he has time to chat. He shows us around his garage, with wall mountings of fish, deer and hundreds of green, yellow and other brightly colored lures he has plucked from the Snake River and the reservoir. He gives each of us a fluorescent orange identification tag to show we have permission to be on the property, should we be asked.

With that, we get wet. The river immediately below the dam is rocky and wide. The river runs over a layer of caprock, which cracks and crumbles away, leaving boulders and a succession of tiny rapids.

All around us is the sound of water rushing over and under the rocks. There are shelves in shades of yellow and green. Water finds a crack and flows under a shelf. Twenty feet downriver it shoots from the underside of the caprock – up-swelling to the river’s surface.

The water is a foot deep, to the middle of the calf. It is gentle and peaceful, yet moving swiftly. We’ve been told it can be a raging torrent when the river is running full bore.

It is clean and clear water, probably 45 or 50 degrees to the touch. Springs fed by the aquifer shoot fountains two inches above the water line. This water is easily 20 degrees colder.

We see boulders that Kelley calls “ankle breakers.” Schools of minnows swim in the current. The smell of pine trees comes over us in the canyon.

The caprock is a constant factor for the Snake. The river runs along the caprock, looking for ways to escape. Around a bend we have our first waterfall drop where the river chipped away the rock. On top is a plateau, then the fall, probably 4 feet in height. Below is a pool with a bottom that we can’t see. Three crawfish claws swirl about. A 50-foot-long ledge of waterfalls cascades downriver from the main fall.

We see a school of several hundred brown trout. They dart by so fast – here then gone. I slip on a rock, and Kelley reminds me of the “ankle breakers.” We’ve forgotten about rattlesnakes and grow mindful of every step.

Now there’s black soil hanging over the river. Cedar trees atop seem to be stabilizing and holding it together. The channel narrows and deepens. Bright green moss clings to the shelf’s underbelly. We’re up to our chests now in water, holding camera bags, food and supplies above our heads. The soil and the trees are above us and we see a caprock ledge supporting this whole structure. It’s a mini-ecosystem below, above and all around.

The river narrows to 5-feet wide up ahead. We’re about to enter this chute. The walls are high and there’s no way out. We realize, with high water, this would not be a safe place to be in. More cedar trees overhang the river. The cavern is dark and deep. The sky is gone now. Nordeen and I leave the water and find a ledge to shimmy along. Kelley swims through the chute to avoid poison ivy, perhaps more toxic to him than a rattlesnake bite. We’d rather not experiment with either.

NORDEEN AND I trudge along, with red cedar branches pricking and scraping on our arms, necks and legs. Meanwhile, Kelley glides through the chute and reports on the life below him.

A giant rainbow trout is pointing its nose upstream. The beast is 15 or 18 inches from tail to nose. At the chute’s other end are 25 more trout, each easily 10 inches long. They scamper under the rocks like rabbits running under the brush of a shelterbelt.

Two miles in and we’re finally out of the narrow chutes. The river opens into a wider canyon with stable caprock and just a few small boulders. No ankle-breakers here.

It’s much less treacherous going now, and a lot shallower too. We can see the sky and the horizon. The water is still clear when we come to a broad pool probably 50 feet oblong and knee deep.

We stop for a look upstream and see the water rippling toward us as hundreds of trout in a school are headed our way. In seconds, the school is surrounding Kelley. It splits, dodges his legs, then regroups behind him. This continues for 20 seconds and then it is done. The school is gone now, headed downstream like us.

As we come around a big bend, the land above the river valley flattens out. We can see grass-covered sand hills and are reminded that we are in Nebraska.

More springs drip from the sand and create puddles that ooze into the river. They make a gumbo mixture. Our feet sink to the ankle. There are plants, moss and bugs growing. More trout.

We happen upon a spring that’s the size of a dinner plate bubbling through the mud. It looks like thin cake batter twisting in a bowl. The water is sandy here, then it slows.

A sandbar forms and spreads across the river. It’s long and rippled. From this view, we could be on the Platte or the Elkhorn River.

A little later, on one sandbar is a crust that holds our steps for a moment, then we sink through. We jump from the bar back to the water then up to the river bank. It’s pure sand with a layer of grass eroding into toadstool chairs. Ryan sits atop one, with his wet feet swinging freely.

We take a short cut across open land where the grass turns lush. Cattle have grazed it to six inches. A heron flies by. We hop a barbed-wire fence and are back to the river.

The sandbars are gone. We’re on caprock again. This time, it’s a wide and expansive slope. The boulders return, and the ankle-breakers.

The river has a will here. It seems ready to do something big. We can see it, feel it.

Soon we hear a rush unlike any sound we’ve heard on this journey. Ahead is Snake River Falls as the river finally finds a way to cut through the caprock for good on its own journey to the Niobrara.

It’s time to leave the river and let it tumble away without us.

We steer clear of the ledge and begin a hike up from the canyon, through deep trails cut along sandstone walls.

We reach for handholds that become powder under our grip. Above us is the Sportsmen’s Club, with cabins and showers. Carloads of fishermen from Omaha are arriving for the weekend.

The three of us look back at the falls and the section of this wild and wooded river behind us.

We’re pleased to have taken a bite off this river and even more grateful that it chose not to bite back.